Home > Testimonials Menu > I learned to walk at C.A.R.E. > Sadie 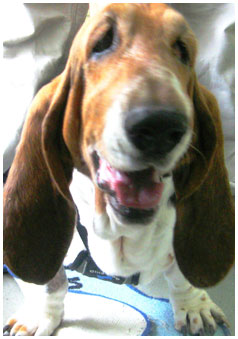 “The people who work at CARE are the most amazing and caring group of people I have met, ever. The first time I took Sadie to CARE, it was a last ditch effort to save her. Sadie could not stand up by herself, could not put the pad of one of her paws on the ground, she would set the top of her foot down instead, she could not take herself outside to do her business, was lethargic and had no will. We had taken her to two different veterinarians, trying to find out what was wrong with her. She was given several medications, none of which made a big difference, and her condition was a mystery to the vets. Then we found CARE.

From the time we walked in the door, I could feel the love, enthusiasm and care for the animals and their owners. Sadie was thoroughly assessed by a veterinarian and a physical therapist, and I was given an evaluation of her condition, along with a plan for her recovery. It was all very professional and I felt like we were in good hands. A few days later, Sadie had her first appointment. We had to carry her in and out because she was so weak. I was a bit apprehensive, because Sadie did not like anyone other than me to help her. She was a little grumpy that first session, but the people who worked with her were like dog whisperers. It amazed me how kindly they treated her and how quickly they gained her trust and got her to start working. After the first visit, Sadie actually looked forward to going to CARE. I think she liked all the positive feedback and goodies she got when she went there. When she would accomplish something as small as walking, everyone in the room would cheer her on. Sadie also never liked baths, so I was wondering how they were going to get her in the underwater treadmill. She willingly walked in and did her exercise! It was more like a doggie jacuzzi, if you ask me.

Acupuncture was another hurdle I thought she would have a problem with, but the first time, and every one after that, she was so relaxed, she slept through the entire session. Sadie loved the massages she got from the physical therapist, and would groan in pleasure. She even liked the hurdles and the balance board. Sadie wagged her tail the whole time she was there. Before long, Sadie was getting up by herself, letting herself out the doggie door, and even walking blocks with me. I felt like I got my dog back, all because of the wonderful people at CARE. I will be forever grateful to them, and cannot help but sing their praises every time I tell Sadie’s story.”