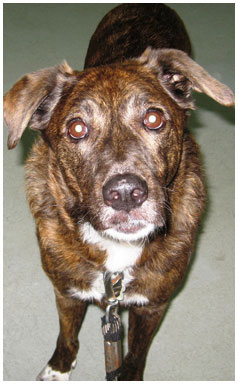 “The team at CARE is amazing. My first exposure was to Dr. Jessica Waldman who was not only professional and caring but totally cool. She had a sense from the start that our dog T-bone may have had something else going on. Originally his joints were swollen, he couldn’t use his left rear leg, he was feverish and barely eating and was diagnosed with a staph infection. His symptoms dissipated but then a month into his treatment at CARE his symptoms came back and she sent us immediately for follow-up care and confirmed her suspicions- that he has an autoimmune disease.

Her partner Amy Kramer and the other doctors and therapists at CARE are equally talented. They have ALL at different times offered sage advice and suggested new beneficial treatments. The support staff and assistants couldn’t be more helpful and loving toward my dog. I was tentative at first about leaving my dog with strangers but they quickly became his friend and advocates. Now when we show up for appointments he runs in the door. Maybe it’s the treats, but I’d like to think it’s the staff.

T-bone has had a rough year but is starting to look and act like our dog again! We can’t recommend CARE enough.”