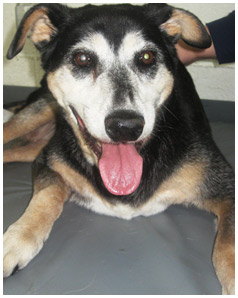 “Before we were referred to CARE, my 16 year old Shepherd Doberman mix, Kimberly had been diagnosed with Degenerative Myelopathy and severe arthritis in her lower spine. We were referred to CARE in January 2010 after Kimberly suddenly was unable to get up from a lying down position and had severe weakness in her back legs. To complicate things further, Kimberly also had re-injured her left hind knee from an old injury when she fell on our stairs several years ago, and now she could not walk. When Kimberly first started therapy at CARE, Kimberly could not put any weight at all on her left hind leg, she could not get up by herself nor walk by herself. Kimberly had to be totally lifted and supported to get up or walk. I was so worried that Kimberly’s prognosis would not be good. But after just over 1 month of therapy by the devoted CARE doctors and physical therapists, Kimberly is not only happily walking all by herself and at a quick pace, but she is also starting to get up by herself! I can tell that Kimberly is really enjoying getting back to being her energetic self! Kimberly is also enjoying her new healthy diet incorporating fresh vegetables, whole grains, and protein which was specifically recommended based on Kimberly’s situation, and now Kimberly is really wolfing down her meals! Kimberly and I are grateful for the care, expertise and devotion of the doctors and physical therapists at CARE. I know their diligence has given Kimberly a new lease on life!”